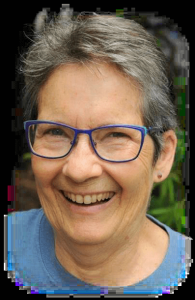 I grew up on a farm in the Highlands of Kenya and emigrated to Australia in 1972, with a husband and two children under the age of 3. We had both grown up in Kenya, having moved out from England at a very young age with our respective parents.

The goings on of the farm were always fascinating to me and as a toddler I had watched our first house being built from wattle and daub, with a thatched roof, mud floor and a blanket across the doorway. As pioneer farmers, living in this hut, while a larger two roomed house was built close by, was more convenient for my parents than staying with the nearest neighbours a mile away. (The photo at left shows us outside that house in 1947.) My Dad made sure I knew how to hammer in a nail straight and use a saw as I got older, while home from boarding school. 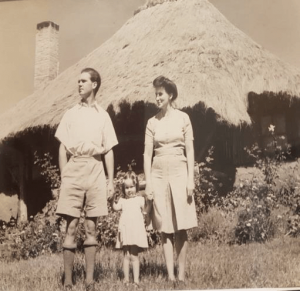 We bought our first house in Sydney in Como West in the Sutherland Shire and when my daughter started school in 1977, I found my first job with Warner Lambert/Parke Davis in Caringbah. The office was moving from North Sydney to The Shire and with the chaos of the move, I was able to hide the fact that I had not worked for 7 years, as I readjusted, after staying home with my young children until they had both started school. I worked at Solahart in their Eastern States head office in Miranda, and Rendell Industries in Hurstville (who did all the fit-out for the Queen Victoria Building). Then I had a couple of years with Drake Overload, doing temp work, which meant going into an office and having to pick up quickly how the office was run, names etc., so that I could do the job assigned to me. 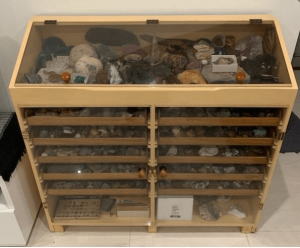 As a young Mum, I loved helping my children put together projects for school, and when my son was about 13 and showed a keen interest in lapidary I decided to go to evening classes in woodwork at Miranda High School to make him a display cabinet for his rock collection. He’s 51 now and still has that cabinet filled with his precious rocks, since child-proofed with a perspex lid and doors.

Later, when the children were in Years 9 and 11 and we’d moved across the city, I got the opportunity to go to another evening class to learn woodturning, held at Normanhurst Boys High School and I made a few bowls, vases and salt and pepper shakers.

I have been fortunate to travel a lot, helped by my first husband being an aircraft mechanic with East African Airways in the 1960’s when we were able to travel ‘subject to load’ and paid only 10% of scheduled fare. My parents lived in Dar-es-Salaam in Tanzania for a few years (Dad was Bursar at Dar-es-Salaam University after selling the farm) and we could pop down there for the weekend in a DC 3 for the equivalent of $10! When we came to Australia, my husband worked for Qantas for 6 years and we were able to enjoy overseas holidays with similar privileges, but less opportunity, being a stay-at-home mum with 2 young children.

When I met Peter Ruehmkorff in 2003, he wanted to show me Germany and meet his family, so in the nearly 10 years we were together before he died, we went to Europe 3 times, visiting Germany, the Czech Republic, Russia and Iceland. On the last trip in 2012 we went to China first, having originally booked to go on the Trans-Siberian Railway however, Peter was too sick to handle that long train journey, so we flew from Beijing to Moscow.

After Peter died, I had the good fortune to attend a workshop in New Mexico, over 5 years from 2014 to 2018, in May and November for 10 days each time. I loved the camaraderie of the class, with about 100, mostly young people from all over the USA, Canada and Europe and me from Oz. I got to know Santa Fe and Albuquerque where I stayed with friends before and after classes. What a privilege!

Last year, I had a ‘Trip-a-Deal’ adventure in Russia, having loved my first taste of that country and people. I thoroughly enjoyed the river cruise from Moscow to St Petersburg, every day stopping at an interesting town or village. A Baltic Extension was added, visiting Helsinki in Finland, then across on the ferry to Estonia and a bus trip through Estonia, Latvia, Lithuania and Poland over 6 days Helsinki and Riga were the most memorable, as we were able to stay for 2 nights and see more.

My daughter lives in Perth and she also has a love of wood, attending W4 – Women Working With Wood – at Balcatta Men’s Shed, when she has time. (Incidentally, W4 only have access to the Balcatta Shed every second Saturday afternoon, which makes me feel very spoiled with our Shed here.) Nicola and I have a tradition of going on a weekend workshop together, if we get the opportunity, when I’m in Perth and twice we went to the Dwellingup School of Wood (about 1 hour south of Perth). I’m proud of the jewellery box I made about 20 years ago, with a simple inlay in the lid. A few years later we both made blanket boxes over 3 days, and my grandchildren have one each, as their toy boxes. 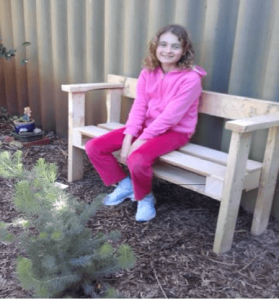 Greg Miller in Perth has a great business called The Joy of Wood and we’ve been to a few of his workshops, including one making furniture out of pallets, which was fun and I’ve left a 2-seat garden bench in my daughter’s back yard as a reminder of that visit. Also, a spoon making workshop, only using hand tools, was another thoroughly enjoyable day under Greg’s tutilage, leaving me with a strong desire to do more.

So, when I moved to Hornsby nearly 3 years ago and discovered a flyer for the Shed at Hornsby library, showing that women were welcome, I jumped at it!

I love the Shed, the camaraderie and the friendly, unselfish assistance and encouragement of the Supervisors and the way some of you go out of your way to guide my sometimes cag-handed way of doing things to show me an easier way – usually achieving a better result.

A lot of you would have seen me making my shave-horse over the last many months. I learned a lot from that project – mainly, to think twice before tackling such a large project, with a heavy pieces of timber to lug back and forth. Anyway, it is finally finished so I will assemble it at home and carve spoons on it, while, at the same time, learning how to use a spokeshave! I am very grateful for all the assistance and encouragement I received doing this project