From Israel to Hornsby Men’s Shed 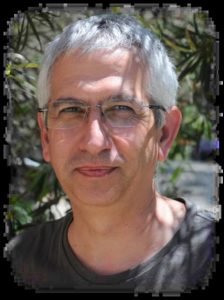 I was born in 1971 in a small town in Israel called Migdal Haemek (not far from Nazareth). I am the eldest child of Esther, a school teacher, and Victor, an electronics technician. I have one younger sister. My early childhood, though a bit vague now, is filled with “scientific experiments”, from building cardboard spaceships and aluminum foil rockets to casting lead figurines in the kitchen sink (it is a sheer miracle that the house still stands). Growing up, I embraced my inner geek, pursuing my interest in everything to do with science and engineering, including computers and electronics. When I realized that experiments are better conducted somewhere else, I started taking the bus to the Technion (the Israeli Institute of Technology) in Haifa for advanced engineering and science classes. Several years later (while in high school) I became an instructor in some of these classes.

My father had at the time a small repair shop for TV sets and electrical appliances and I spent my childhood years with him as my mentor. Before long I have started repairing appliances myself and became intimately familiar with the inner-working of VCRs, TVs and stereo system. My father and I shared a passion (perhaps an obsession) for music and fine sound reproduction We designed and built several high-end loudspeakers, stereo amplifiers and home-theatre rooms. My father had access to a friend’s carpenter’s workshop. We spent many days there building loudspeaker cabinets from plywood and MDF.

Growing up in Israel was much safer and peaceful than it may seem from the outside. It is true that Israel has always been under threat from the surrounding Arab countries (literally from the day it became independent), but as a child, daily life felt rather safe. Having said that, the Jewish-Arab conflict within Israel did start to escalate in 1987. Suicide bombings and other terrorist attacks affected people’s sense of well being and safety. An Israeli coming to live in Australia can’t help having a sense of unease when noticing that there are no guards or metal detectors at the mall, post office, bus stops etc.

Military service is a big part of daily life and culture, because it is compulsory. 18-year-old, men and women, are recruited for several years (it varies, but for a man it’s a minimum of 3 years). Not only that, but many men remain reservists for 20-30 additional years, having to serve 2-6 weeks every year. From an economics point of view, the defence industry is one of the largest in the country, a huge driving engine for the outstanding high-tech culture of the country. Many start-up companies were founded and staffed with graduates of technical units such as cyber warfare, intelligence and the air-force. From a social and personal perspective, the army creates tight bonds among people from all strata and geographical loci. Army buddies will always share a special connection, especially in combat units.

Some high school graduates are allowed to complete tertiary studies before enlisting. These students usually join the army as professional officers, engineers, doctors and scientists. That was the case for me. I studied for a BSc in physics at the Technion and joined the army in 1992. I spent the next 3 years developing advanced electro-optic systems at the headquarters of the ordnance corps.

While serving in the army I met Hannah, my future wife. Hannah is an accomplished musician and musicologist who was at the time an English teacher at the air force. We became soul mates and eventually got married in 1998. We have 3 wonderful kids – Nova (18), Peleg (14) and Almog (7). The birth of our children was an excellent excuse to temporarily convert our home into a workshop. I built cribs, beds and other furniture for our children.

Upon my release from service, I worked as a professional physicist for several years. In 1998 I founded software company called Be4. The company developed advanced sound processing algorithms for mobile phones, car stereos and home-theatre systems. I was granted three patents for various inventions in this space.

During these years I kept thinking of ways to tackle an issue that had challenged me for some time; that is ways to improve the performance of mobile-phone speakers. Their small size and limited power resulted in the sound quality of these speakers being very poor. I realised that I was at a significant disadvantage compared with the leading speaker manufacturers having spent decades and millions of dollars optimizing the analogue loudspeaker. In 2006 (while playing the board-game Othello), I had a breakthrough which led to founding a new company: Audio Pixels Ltd.

My vision led me to a very different approach to sound reproduction, using an array of small membranes instead of the single large one used today. The speaker will also be controlled digitally, eliminating the last analogue component in the sound reproduction chain. It is based on MEMS (Micro-Electromechanical Systems) fabrication methods – it somewhat resembles an image sensor chip. The speaker features microscopic moving elements and sub-micron structures. It is manufactured using existing machines and processes that are used to fabricate electronic integrated circuits (chips). In 2009, the company completed a working prototype and managed to successfully demonstrate the principle concepts. It was later bought by an Australian public company in 2011. I am the Chief Technology Officer of Audio Pixels Ltd. I manage a small team of highly specialized engineers and hold over 130 patents related to the technology. My daily work involves physics, mechanical engineering, electronics, software, acoustics and process development.

Israel is a beautiful country, very cultural and modern. It is rather similar to Australia in the sense that it is a melting pot, home to people from all conceivable countries. While common faith (and fate) bridge some of the gaps, others are more difficult to deal with, perhaps because of the prolonged state of stress shared by many. The political climate in Israel has shifted in recent years, one of the reasons being the electoral system, in which many parties participate. Currently, the 120 Knesset (parliament) seats are held by members of 11 different parties. Tangled coalition agreements, together with politically orientated economic and growing social trends have led to a split society, in which many born and bred Israelis find their sense of belonging weakened. They helplessly witness dramatic changes in values, feeling used or even betrayed.

In 2017, my company required a technical manager here in Australia. Hannah and I saw this as an excellent opportunity for a new and better life for our family, so we made the move. It was a big change for all of us, but we feel it was a welcome one. The teenagers are happier here, I think, and even though some of us are still in “survival mode”, we can already appreciate many aspects of Aussie life.

I always enjoyed spending time at the lab and workshop, working with my hands rather than on the computer. Moving to Australia required something of an adjustment as I no longer had access to my workshop, tools and machines I had accumulated and built over the years. I actively looked for a practical substitute and, luckily, stumbled across the Hornsby Woodworking Men’s Website. I joined the Shed a couple of months after arriving in Australia and found it to be a perfect fit. Not only am I now creating, making, learning new skills and practicing old ones, but I also find myself surrounded by some of the finest people I have ever met. I try to get to the Shed as often as I can. I find that it is a welcome respite from glaring screens, stressful conference calls and deadlines. I enjoy challenging myself with complex projects and I take great pride in contributing to all the good causes the Shed is involved in.

Since joining in September last year, Yuval has quickly established himself as a member who is in tune with the true spirit of the Shed. He readily volunteers for Shed projects and is happy to share his extensive knowledge of technology, such as the demonstrations that he has given to Shed members on the process and applications of 3D printing. 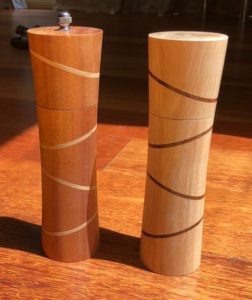 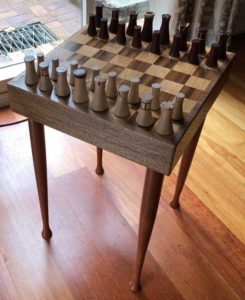 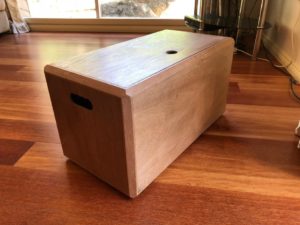 The Shed is open, see our COVID19 protocol.